Our point of view here will be brief, as there is already a wealth of historical writings on the subject.

1- The 1831 conflict
It originated from the question of a fixed price. The suppliers were not in a good position in 1830 because of an economical and political crisis, so they had cut the prices (up to 60% for some figured fabrics). This price cut proved very difficult for the weavers, especially when the orders started again... but the prices stayed the same. They marched through the streets to silently protest on October 25th 1831. The suppliers were impressed but also worried about this silent rebellion, which explains why a majority of them agreed to negotiate a higher price with the weavers (it was the idea of the prefect Bouvier-Dumolart).

100 suppliers (out of 400) were opposed to the new price, the parisian authorities and the national guard of Lyon blocked the application of the contract agreeing to a new higher price. This caused the weavers to rebel, they provoked a huge insurgence: they kidnapped the prefect and the general of the troops. In fact, some shooting occurred, but we ignore who shot first.
Thanks to both good location (the Croix Rousse hill) and good organisation, the weavers had taken the advantage in less than 48 hours (on November 21st and 22d 1831). This rebellion resulted in 150 victims, 500 injured people... But the situation remained relatively calm thanks to the reaction of the workshop masters. Martin Buisson (who was working as a velvet enhancer) took over the direction of the troops, who took control over the city, and who opposed the attempts of pillage. The workshop masters declared that they only want “law and order”, and did not know what to do about this victory. The prefect and the local authorities were established again and the new fprice was confirmed. In the meantime, the government of Louis-Philippe in Paris realised the potential danger and the risk of the spread of such a situation... Louis-Philippe decided to send his own son, the duke of Orléans with an army of 25 000 men to Lyon. Marshal Soult was at their head. This army occupied the city on December 3d 1831, and very quickly discharged the overly kind prefect... They abolished the new price. Even if the weavers were not successful this time, this rebellion has marked the History of the city.

2 – The rebellion in 1834
It was more political and was proof of the persistent unrest among the weavers. In February the weavers started a strike in the Croix Rousse, but the strike soon spread to surrounding areas (Vaise in particular). The strike was then replaced by political considerations, because the Republicans wanted to oppose the July monarchy government (which would create less freedom). 1831 was still fresh in people's mind... and the politicians, still in shock fromthe Croix Rousse rebellion, reacted very quickly (with an army of 10 000 men). The principle massacres occured in the main street of Vaise. The events were quickly forgotten, and order reigned in Lyon for a long time, coinciding with the boost of silk weaving industry.

3 – The rebellion in 1848
It coincided to a new economical crisis linked to the fall of the July monarchy. It was the last startle on the part of the Croix Rousse weavers, who armed for the revolutionary days in February 1848... The group called the “Voraces” rebelled in June 1849 on the slopes of the Croix Rousse, but the repression was very strong and brutal. And that marked the end of the Croix Rousse rebellions. As a wise emperor, Napoleon 3d ordered the destruction of the Croix Rousse’s fortifications, and united the area to the city in 1852. 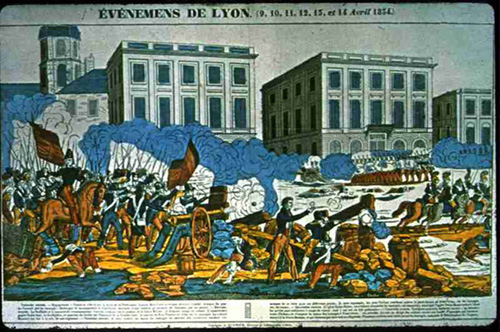