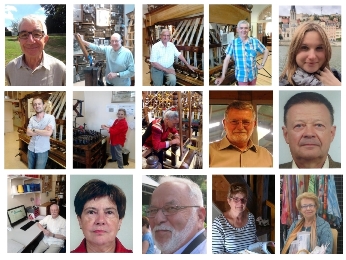 Who are we?
Soierie Vivante is the only association that exists, with the aim of safeguarding the silk heritage in Lyon.
Soierie Vivante welcomes visitors in authentic workshops, holds demonstrations on protected looms, and preserves the heritage, the memories and the techniques.

The goals of Soierie Vivante
Soierie Vivante wants to preserve real workshops so that visitors can see places filled with their history. Soierie Vivante preserves an heritage, dating back to the 19th century, which has left its mark on the area. Without Soierie Vivante’s intervention, this heritage would have disappeared completely.

This is not just another museum, but a journey through time, led by passionate guides, you will enter authentic family workshops and, even sometimes, meet the volunteers, who will help you learn about the equipment, which was used, and pass on their passion and their knowledge.

Another task of Soierie Vivante is to maintain or create jobs, to arouse vocations in connection with the enhancement of the looms.

Soierie Vivante offers…
- Guided tours with demonstrations on the looms in French, English, German or Italian.
- Educational activities for kids: weaving workshop for 7 to 12 years old, discovery visits for 4 to 6 years old.
- Friendly conferences called « chit-chats next to the looms » organised all year round in the trimming workshop.
- A Gift shop supplied with silk scarves that are made in Lyon, books about silk in general, and many other items manufactured by a trust which helps people in difficulty…